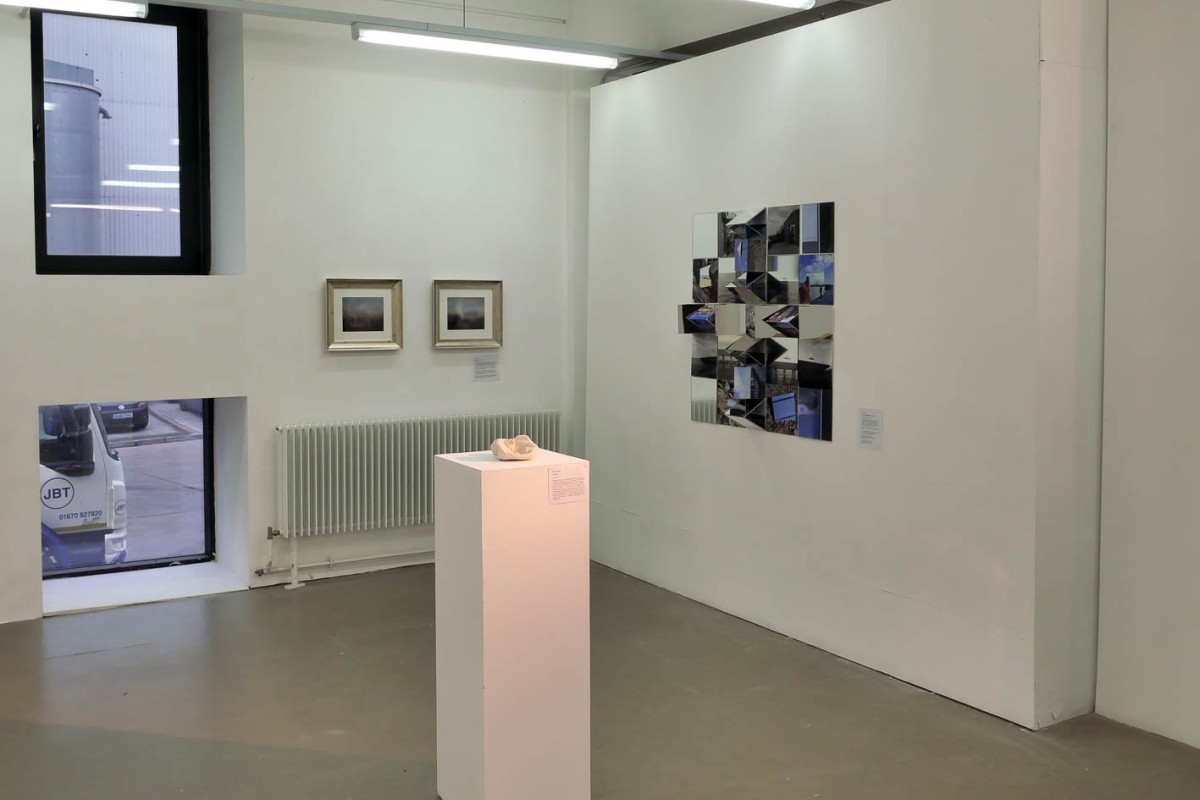 An exhibition at Baltic 39, One of 7 exhibitors as part of our slow preparations for the Summer MA Fine Art/Contemporary Art and Education Course. 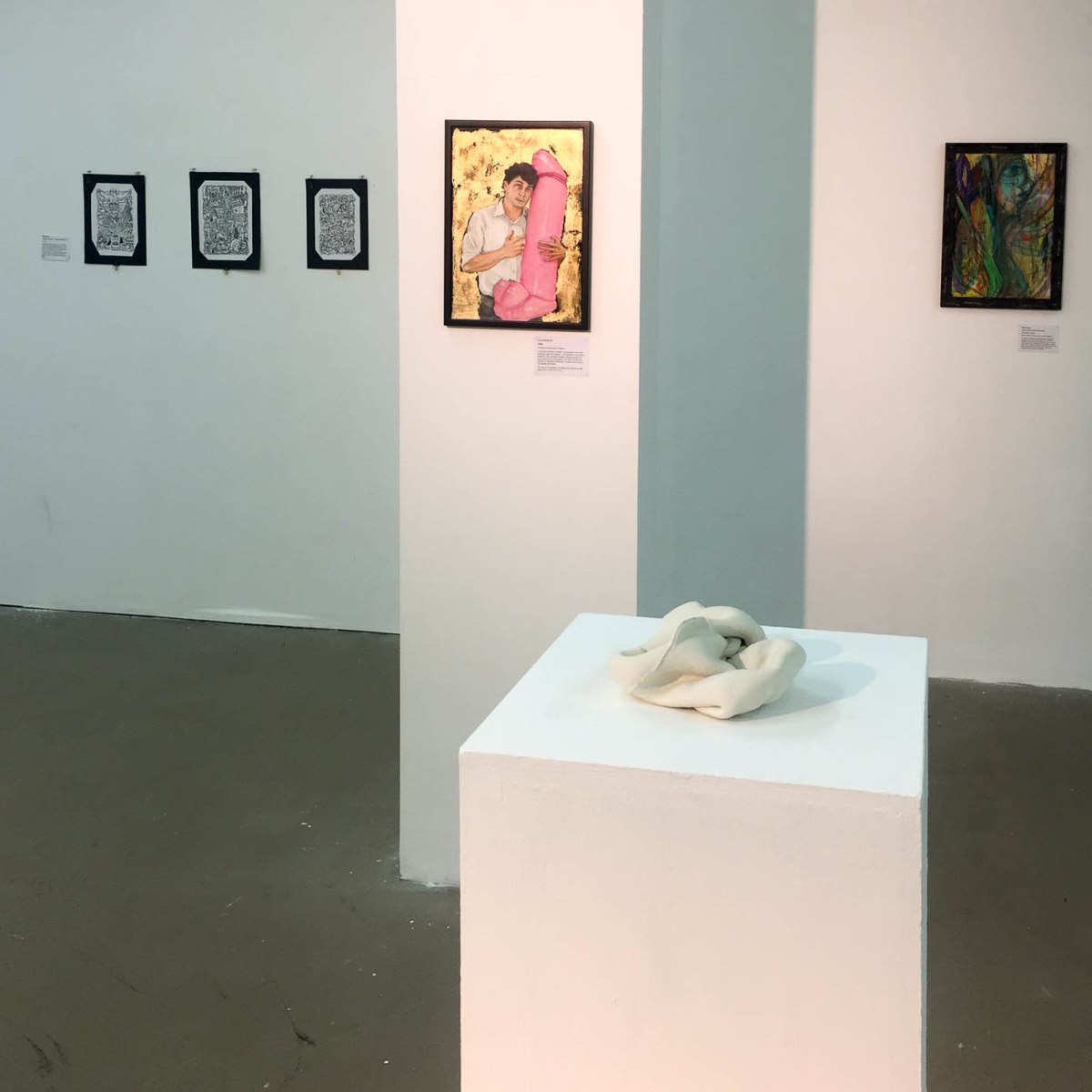 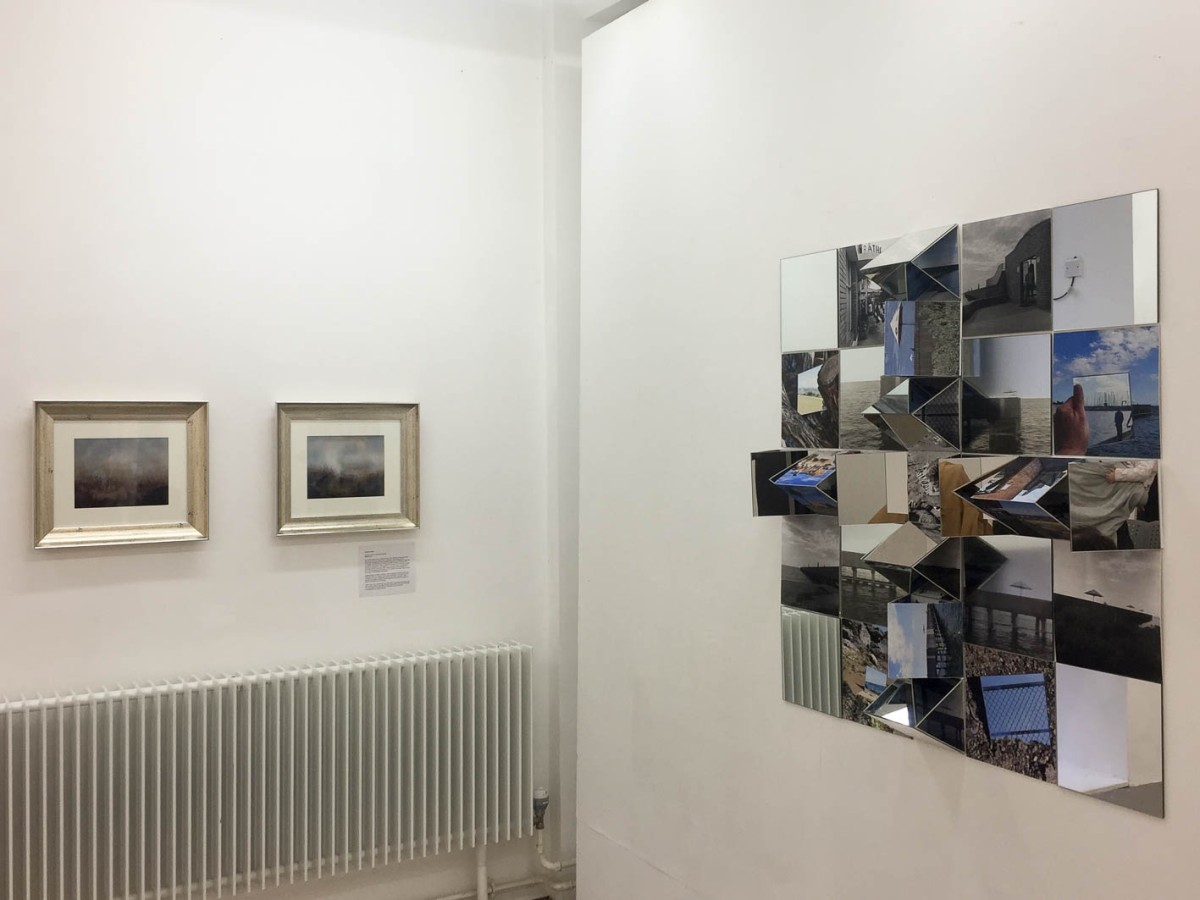 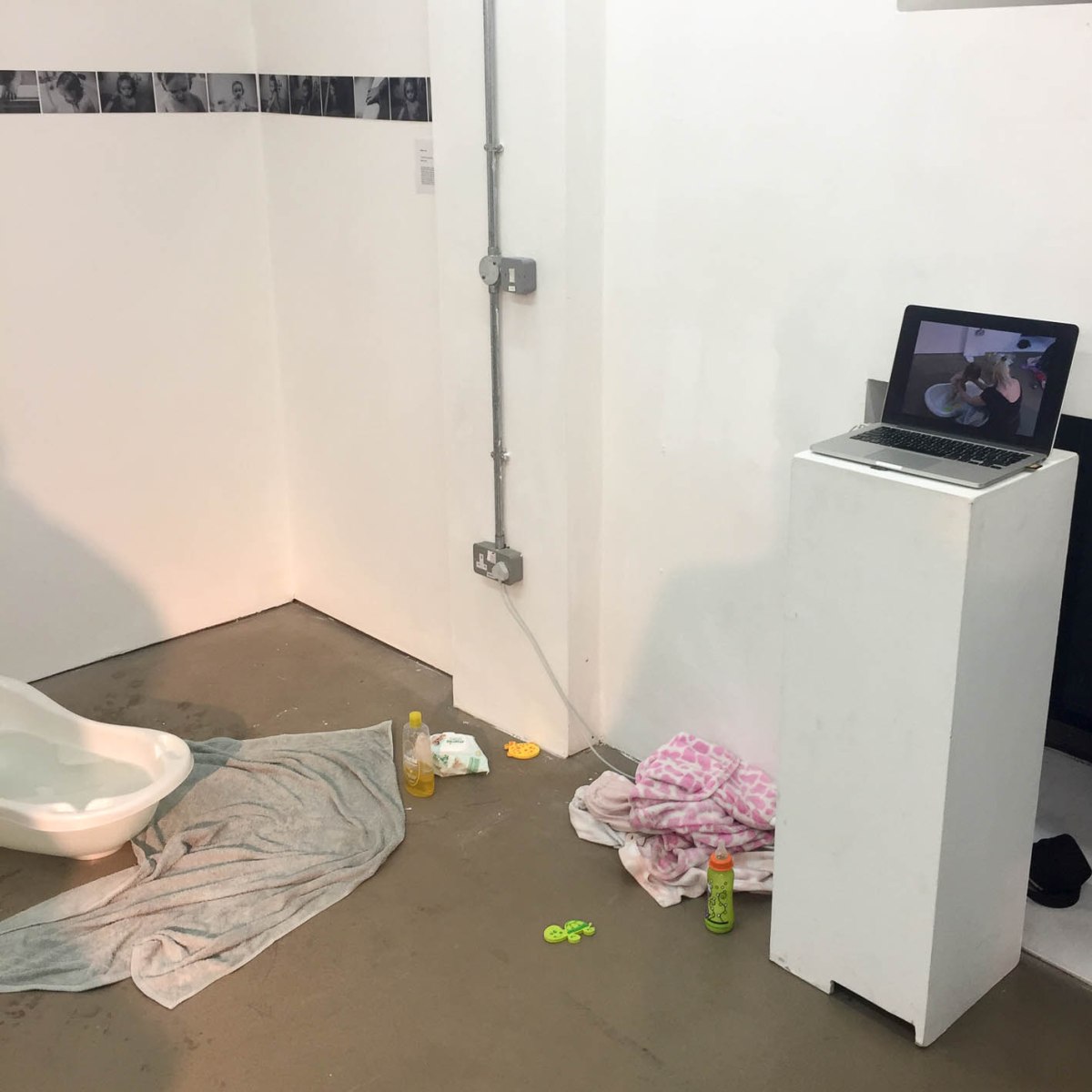 I particularly enjoyed being photographer for Beccy Farr’s performance of ‘Acts of Motherhood Part 1 – Bathing’ and then showing the results on my laptop. 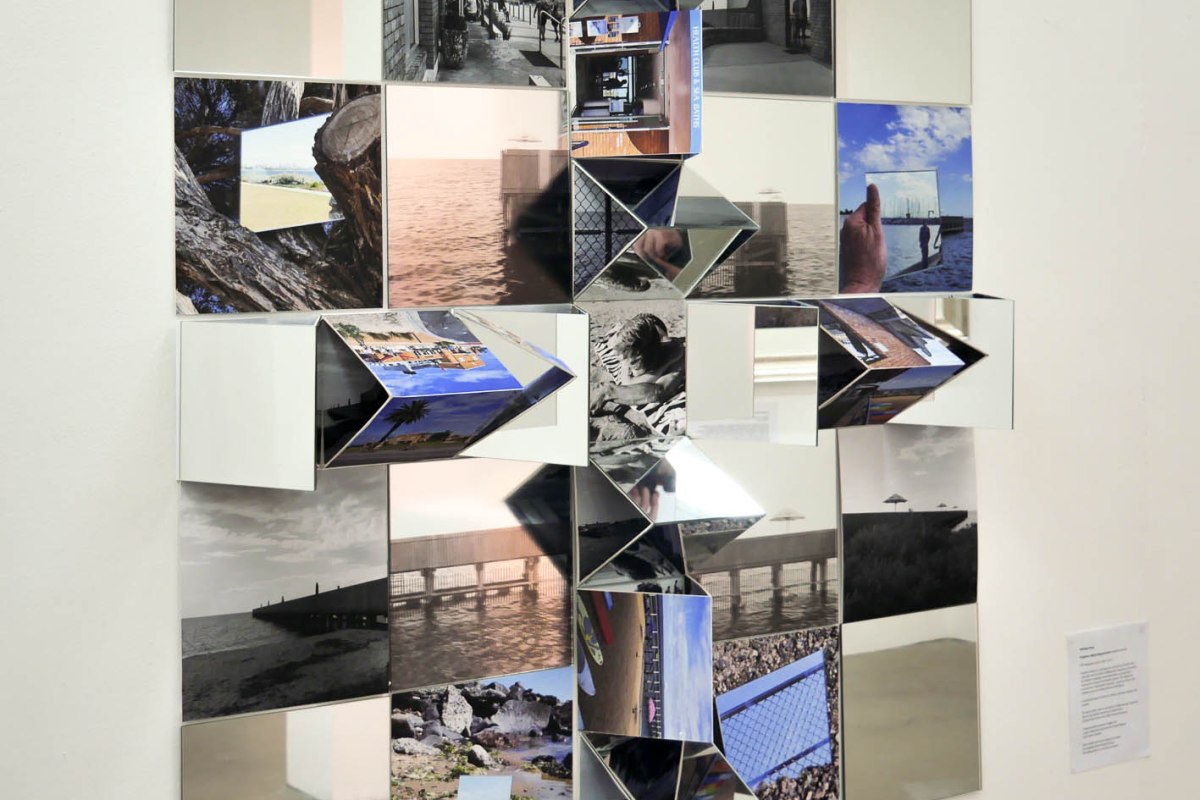 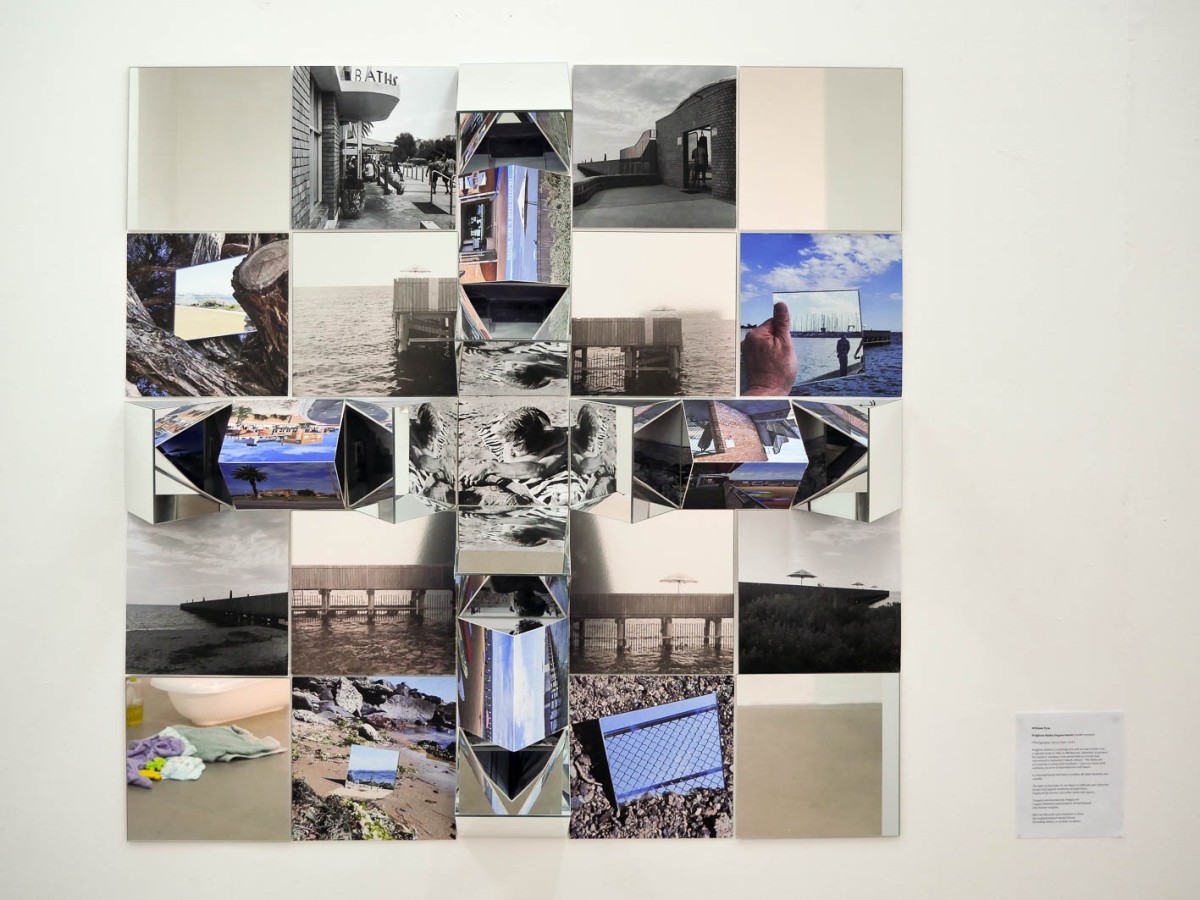 I was very unsure about the merits of this idea and the final piece presented as part of the Transience Exhibition at Baltic 39.

I had experimented with ideas using mirrors as part of an installation but had not really tested it, retrospectively it was a good thing to go straight to a full scale model or trial as the result surpassed my expectations.  The 3d elements were made with a simple card structure of a triangular prism (Toblerone shape).  This proved strong enough but tricky to be accurate with mirror sizes that needed to fix to a central point.  The structures and flat elements all fitted a standard square in two sizes, although there was a degree of trimming and the final version was a bit inaccurate leading to some inconsistent gap sizes. 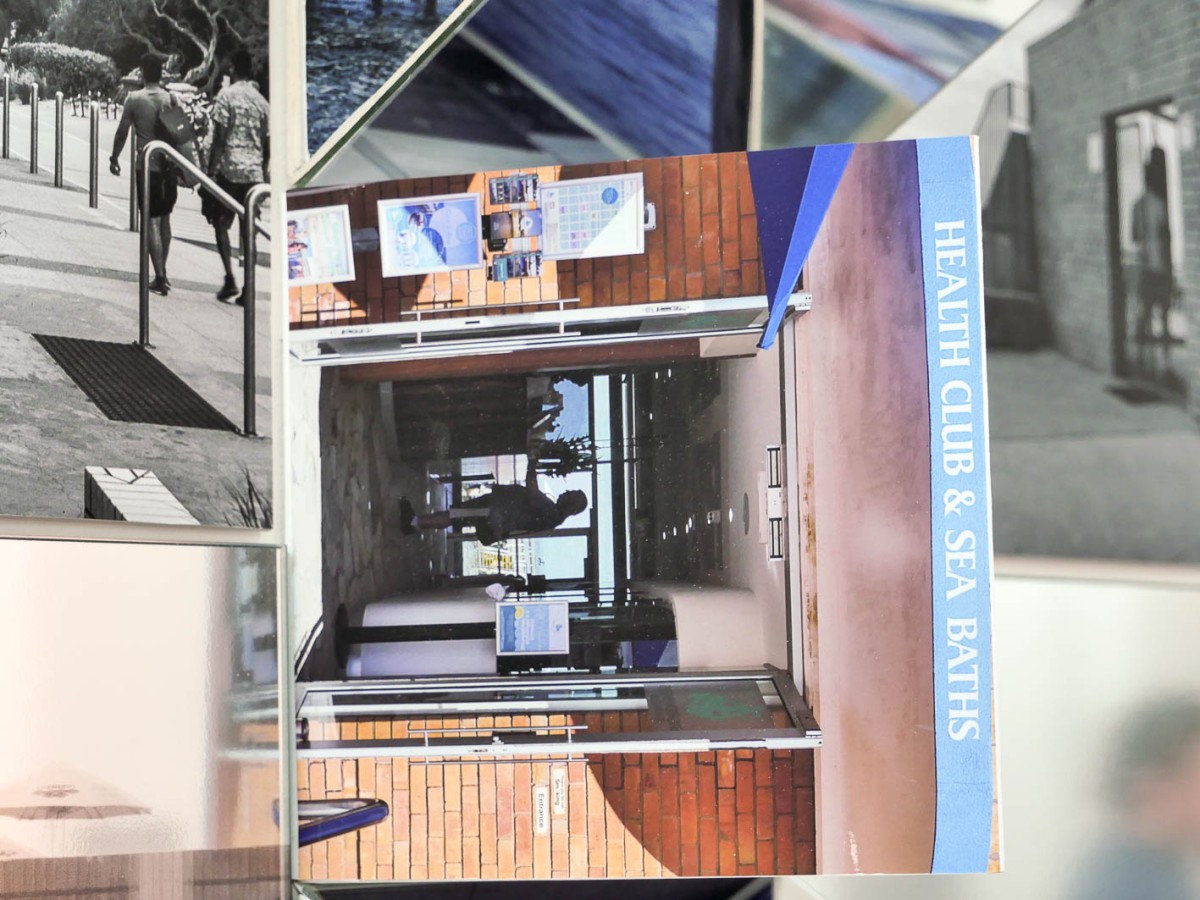 The work used photos from scanned black and white negatives and colour digital captures. All were images of the Brighton Health Club and Sea Baths in Melbourne which I had photographed over Christmas – the idea was to create a kind of distorted image combination of this extraordinary location.  I wanted a feeling of capture, of fortress or protected area, of a kind of indolent space protected by its excluding walls

Brighton Baths is a bathing area and private health club, originally built in 1861 in Melbourne, Australia, to protect the bathers’ modesty, now preserved as a historical monument to Australia’s beach culture. The Baths are enclosed by a substantial stockade – a porous fence with walkway, an acre of separated sea and beach.

A colonised beach territory is within, all other beaches are outside.

The light of that heat on our backs is reflected and refracted,

Recast into fugitive memories of experience

Displaced by mirrors into other times and spaces.

Trapped and boundaried, images are

Rare worlds with such creatures in them

Excluding others, to exclude ourselves. 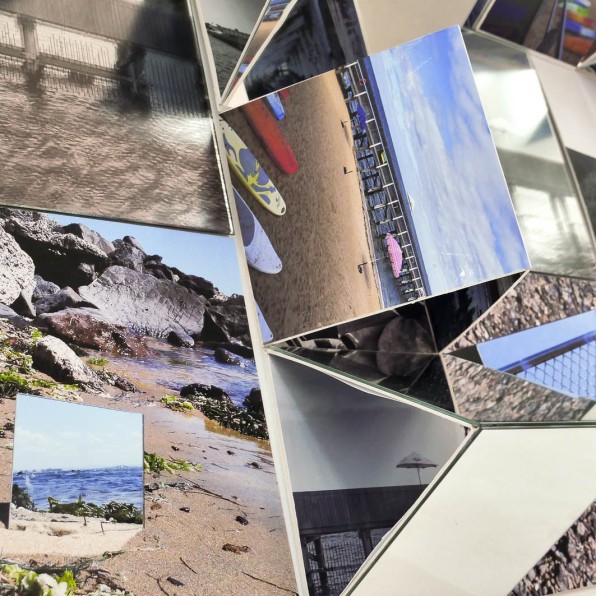 The simple 60 degree triangular format for both mirror sections and the opposite arraigned photo prisms, created a myriad of reflections, including glimpses of the undersides of the prisms.  This dislocation created some really exciting effects, optical illusions, but not ones that necessarily presented as tricks of light, it genuinely felt as if small worlds were opening up. 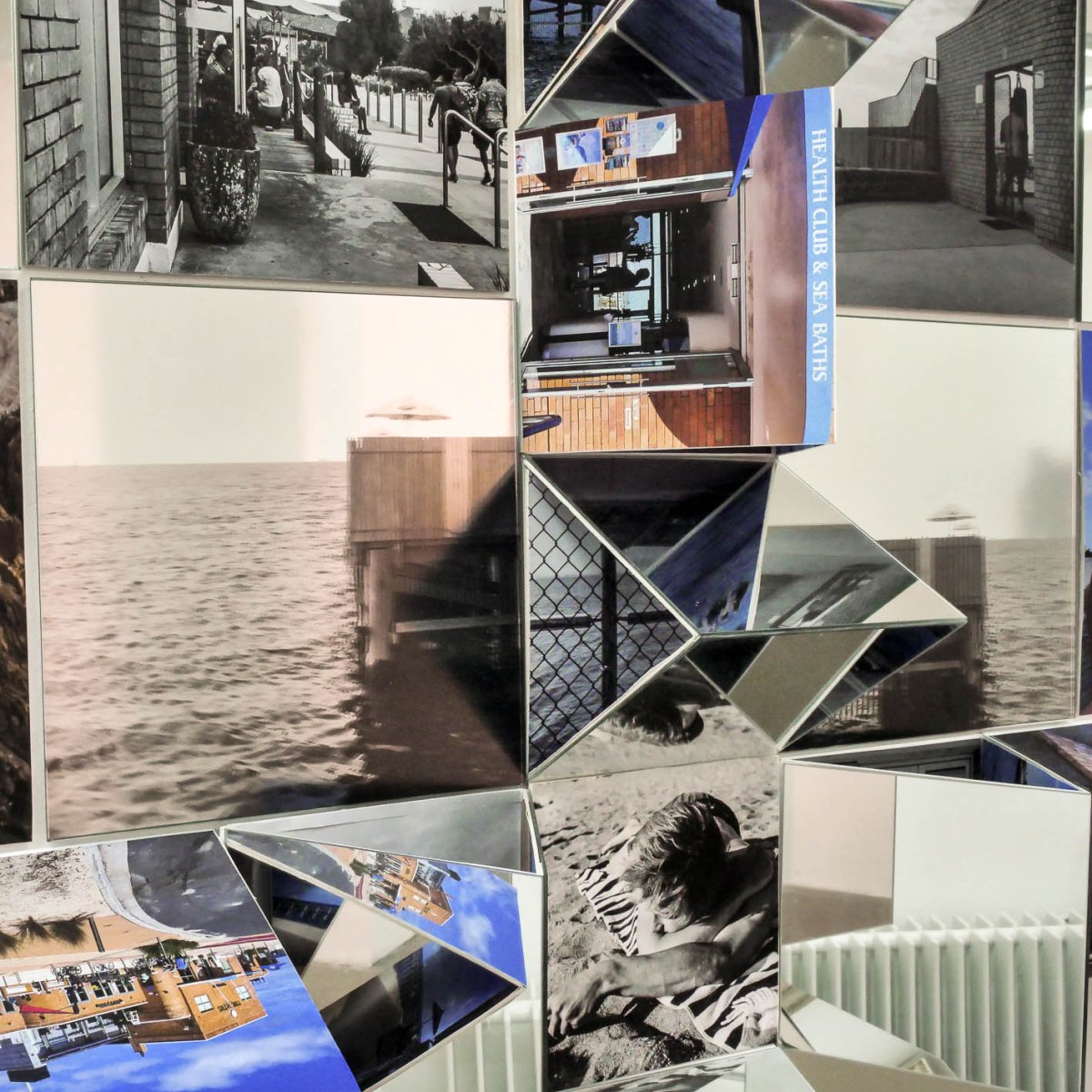 Lots of things to consider now:

Perhaps it is unfair to self criticise the choice of museums on our annual Paris Trip from School.  It is an amazing array of work to share with young people in 4 short days…..

Visiting a museum is a matter of going from void to void. Hallways lead the viewer to things once called ‘pictures’ and ‘statues.” Anachronisms hang and protrude from every angle. Themes without meaning press on the eye. Multifarious nothings permute into false windows (frames) that open up into a variety of blanks. Stale images cancel one’s perception and deviate one’s motivation. Blind and senseless, one continues wandering around the remains of Europe, only to end in that massive deception ‘the art history of the recent past’. Brain drain leads to eye drain, as one’s sight defines emptiness by blankness. Sightings fall like heavy objects from one’s eyes. Sight becomes devoid of sense, or the sight is there, but the sense is unavailable. Many try to hide this perceptual falling out by calling it abstract. Abstraction is everybody’s zero but nobody’s nought. Museums are tombs, and it looks like everything is turning into a museum. Painting, sculpture and architecture are finished, but the art habit continues. Art settles into a stupendous inertia. Silence supplies the dominant chord. Bright colors conceal the abyss that holds the museum together. Every solid is a bit of clogged air or space. Things flatten and fade. The museum spreads its surfaces everywhere, and becomes an untitled collection of generalizations that mobilize the eye.

View from the Musee Orsay 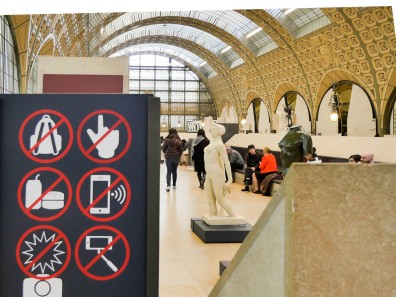 all the things that can’t happen in a museum

I had never been to the Musee Orsay before, and was stunned by the sense of battery farm for famous art, the giant reclaimed station dominating spaces, but maybe the whole experience was reduced by the cumulative tiredness of a residential school trip. The reflected light of a glass case or the view from behind the clock having more of an impact on a tired mind.

famous lovers Heloise and Abelard and Composer Chopin are immortalised in miniature  buildings set behind metal fences that seem to devise them from the kingdom of the living.

The individual plots outlined by fences and borders, in Paris they are more ornate than those simple grave places recorded by Nancy Holt in the American west.

The unsubtle crash barriers that surround the relatively plain burial place of Jim Morrison, to protect it presumably from overzealous fans, create an exclusion area, a security zone in the otherwise mostly democratic space of the graveyard, where the temples stand together and the trees grow around and through the stones. 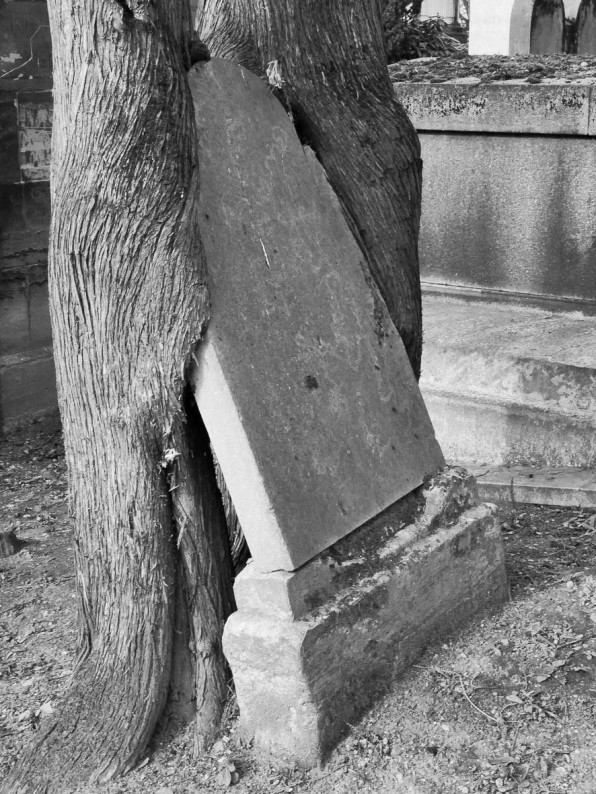 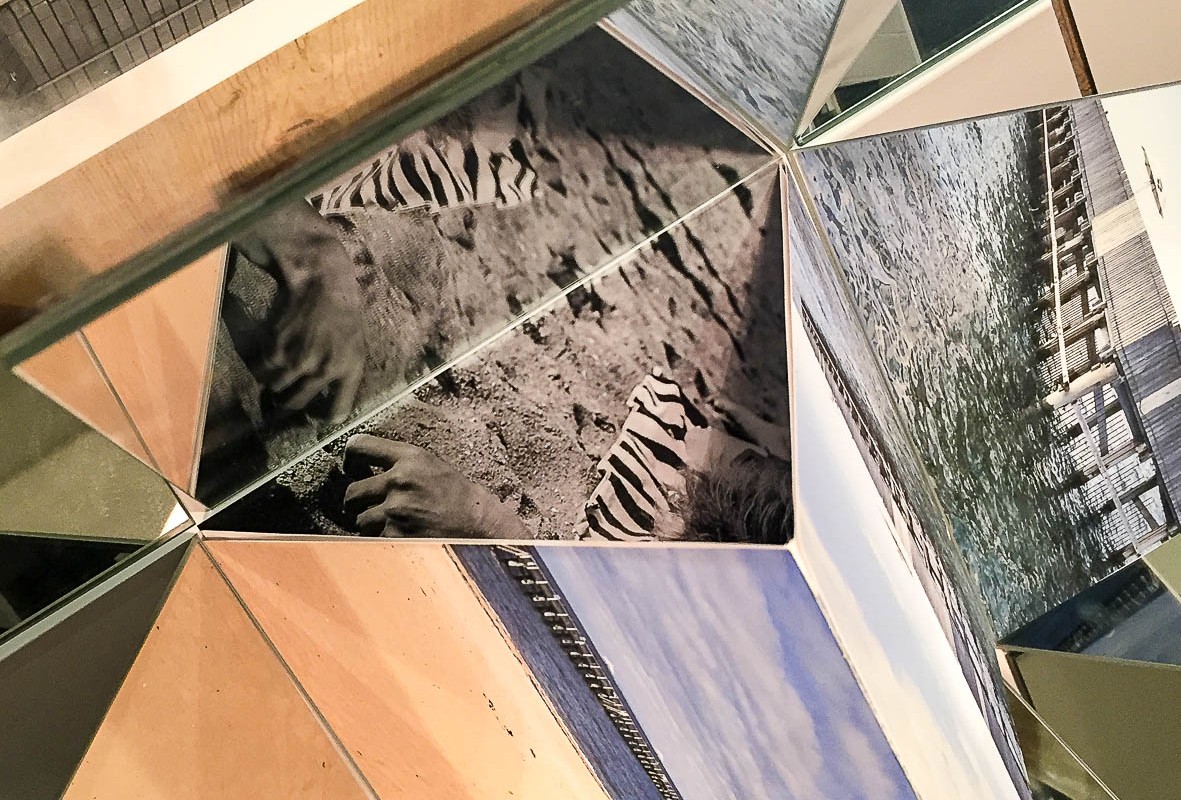 New work for Transcience exhibition.  photographs and mirrors creating layers of multiple displacements.  Building on ideas started in Australia while thinking about the weird displacement that was going to Australia, the special space of privilege in international visa free travel.

This photographed on the table, with snapshots of walls and ceilings and lights – so something diffrent will happen when it reflects horizontally off the wall.

Perhaps the work becomes a machine a kaleidoscope maker to be used in diffrent places. 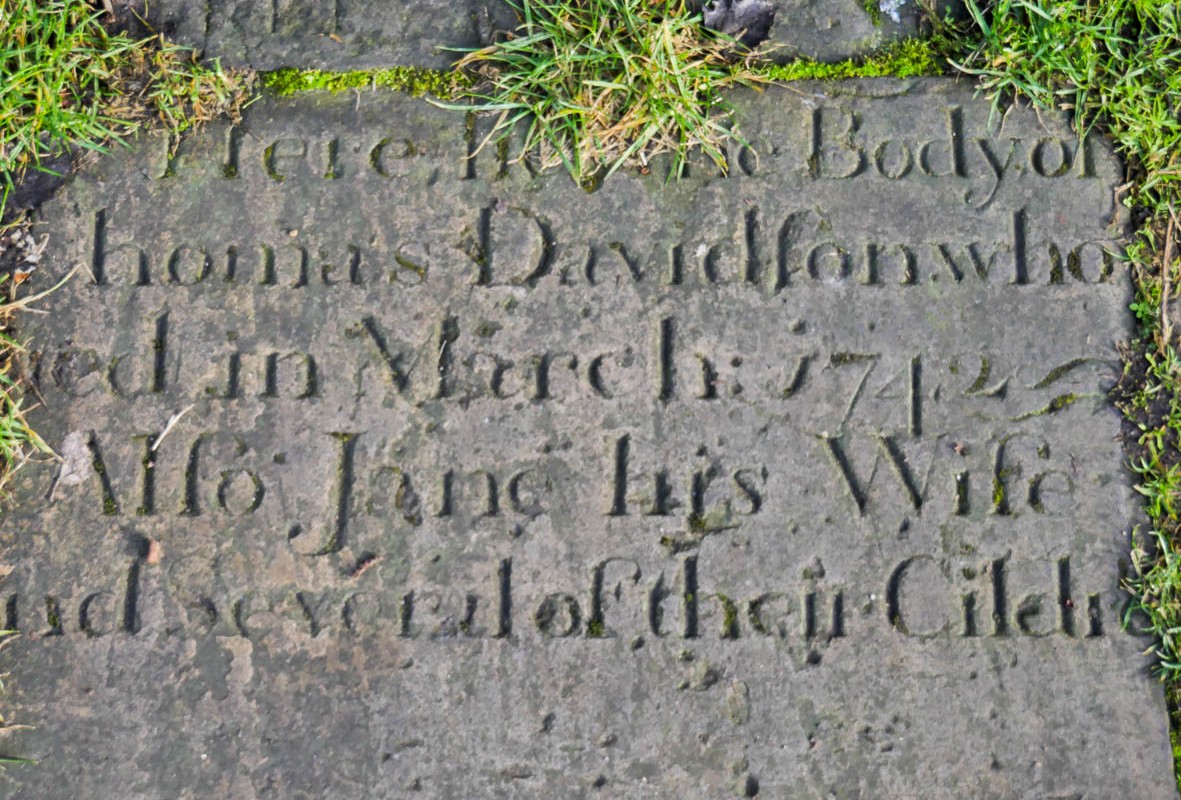 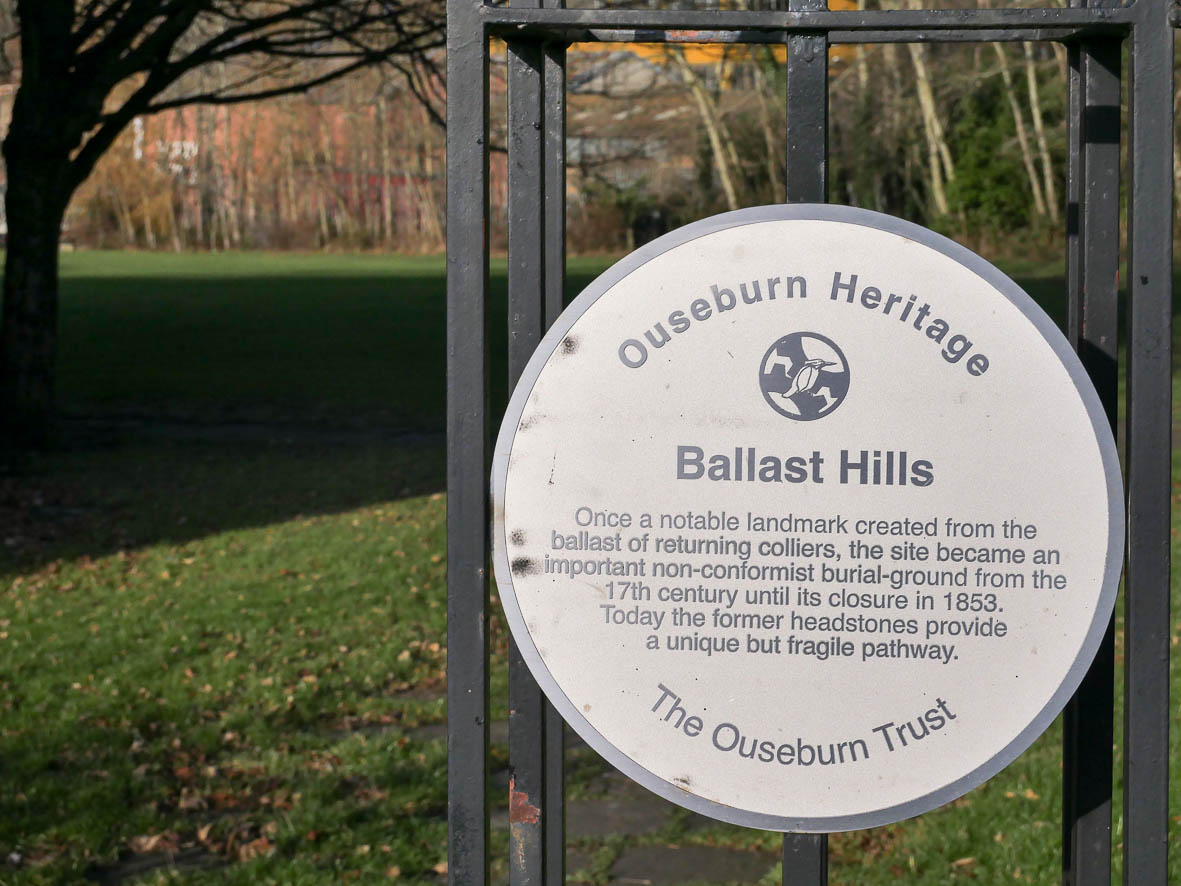 Researching the history of Ballast Hill – as a possible site of a Plague Pit from the 17th century as a possible source for material for a piece for the forthcoming Plague exhibition.

Ballast Hill started life as an area of waste and dumping ground in the 16th century on the outside of the Ouseburn on Newcastle city’s then Eastern edge. Ships returning to Newcastle after delivering coal to London or further to Europe carried ballast or ‘balance’ to keep their keels in the water, this was a waste material that was cleared out to allow new coal to be reloaded. It started to be used informally as a burial ground.

It later became a formal non conformist burial ground and then when decommissioned, turned into an open area of green space, gravestones now laid down as pathways.  It is an anonymous place until you look beneath your feet. Like a slight absence tucked away behind the new university accommodation and graffiti garage walls.

I have put together a timeline – there is a sense of a very informal burial ground for the poor outside the city walls in the 17th century.  The gravestones laid on the ground are actually from a century later – earliest I saw was 1737? –  Later the burial ground is fenced and formalised – to keep the pigs out!  This is all from after the time of the Black Death and into the time of Cholera.  It is like there is a layer below those mournful stones of even more anonymous immigrants from ships all over Europe and the Scots – buried in with the trash, and possibly a plague pit in 1636 ?  The map of 1788 shows Ballast hill quite a way out – disconnected from the city.  Is Ballast hill a story of immigration as much as plague?
The horror of the plague pit – the sense of anonymous burial and the shame of this echoes through the centuries.  We now associate it with genocide (I have stood on the mass graves in Kigali, Rwanda) Holocaust, Bosnia.  Also the digging up of these places to provide evidence.  The Ebola and aids mass graves have a more cohesive story – a more positive ‘spin’ perhaps……
I think that I somehow want to mark and bring to the surface the people of Ballast Hill from before it’s time as a graveyard, but they are probably unrecorded….Could I /we bring something to the space and record it? 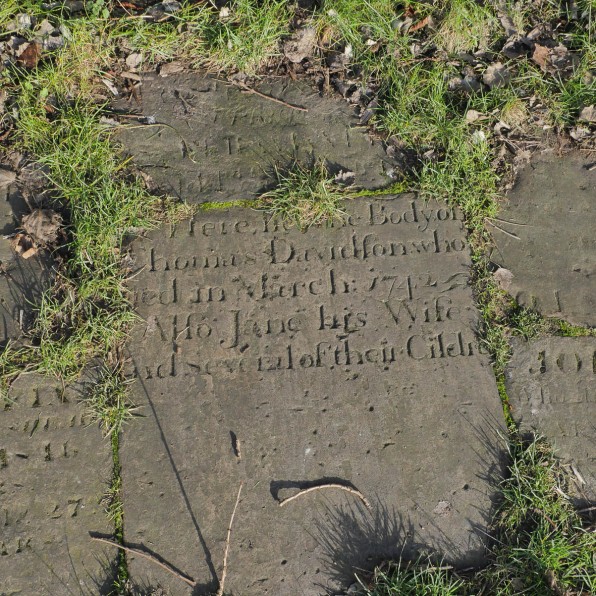 Gravestones laid out in pathways.

Moving inscription to a couple and ‘several of their children’ 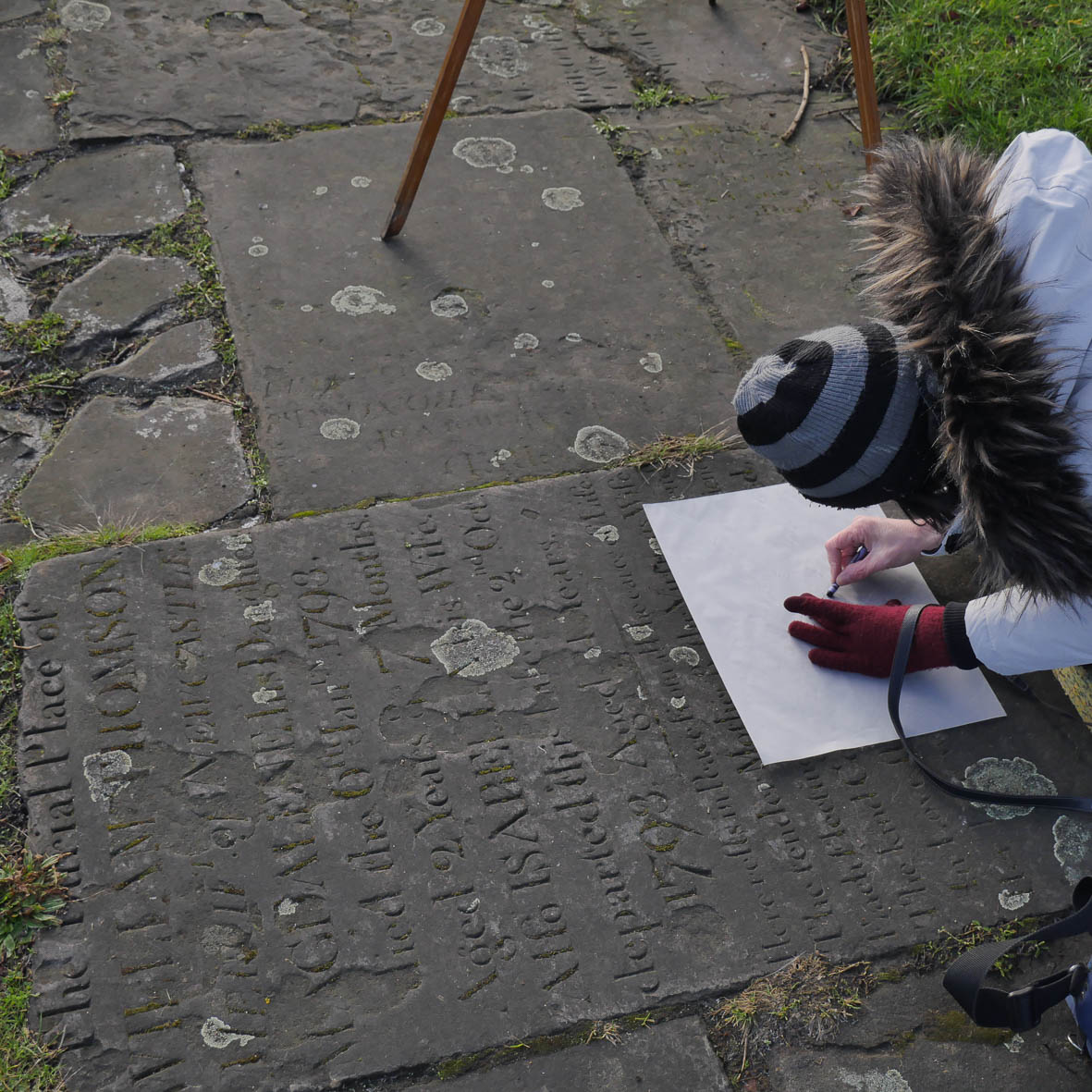 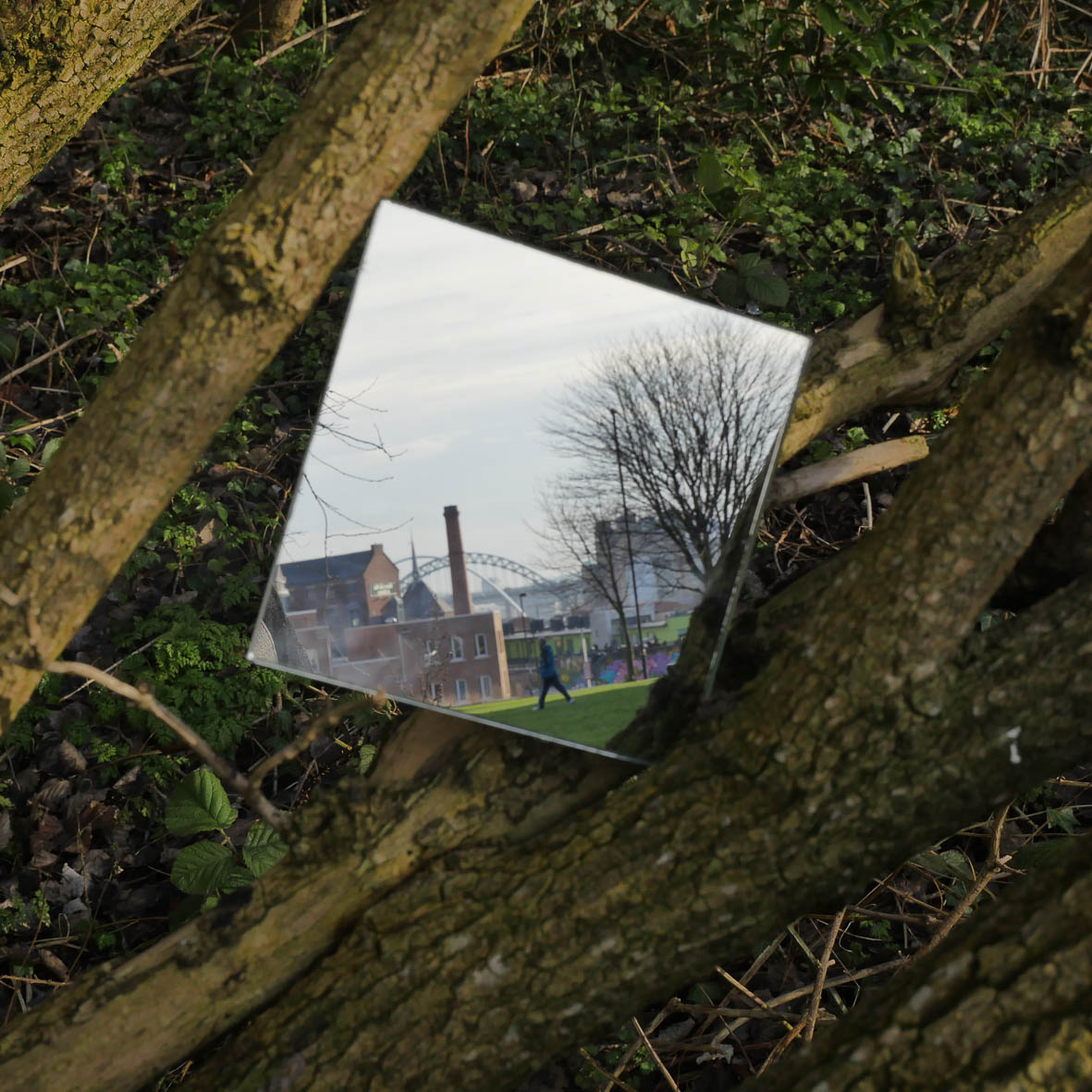 mirror displacements project the view towards the city

bridges in the distance

First visit to Newcastle Cathedral in anticipation of a possible exhibition in association with a conference on Plague and Civil War due to take place in April in St George’s Chapel in the cathedral.

Plenty to catch the eye.  Not least – The Thornton Brass:

an extraordinary detailed and large brass originally from the tomb of Roger Thornton and his wife Agnes, he was mayor of Newcastle in the 15th Century.  The classic shape of the medieval figure is repeated in small outlines of the seven sons and seven daughters of the couple at their feet and the surrounding saints. 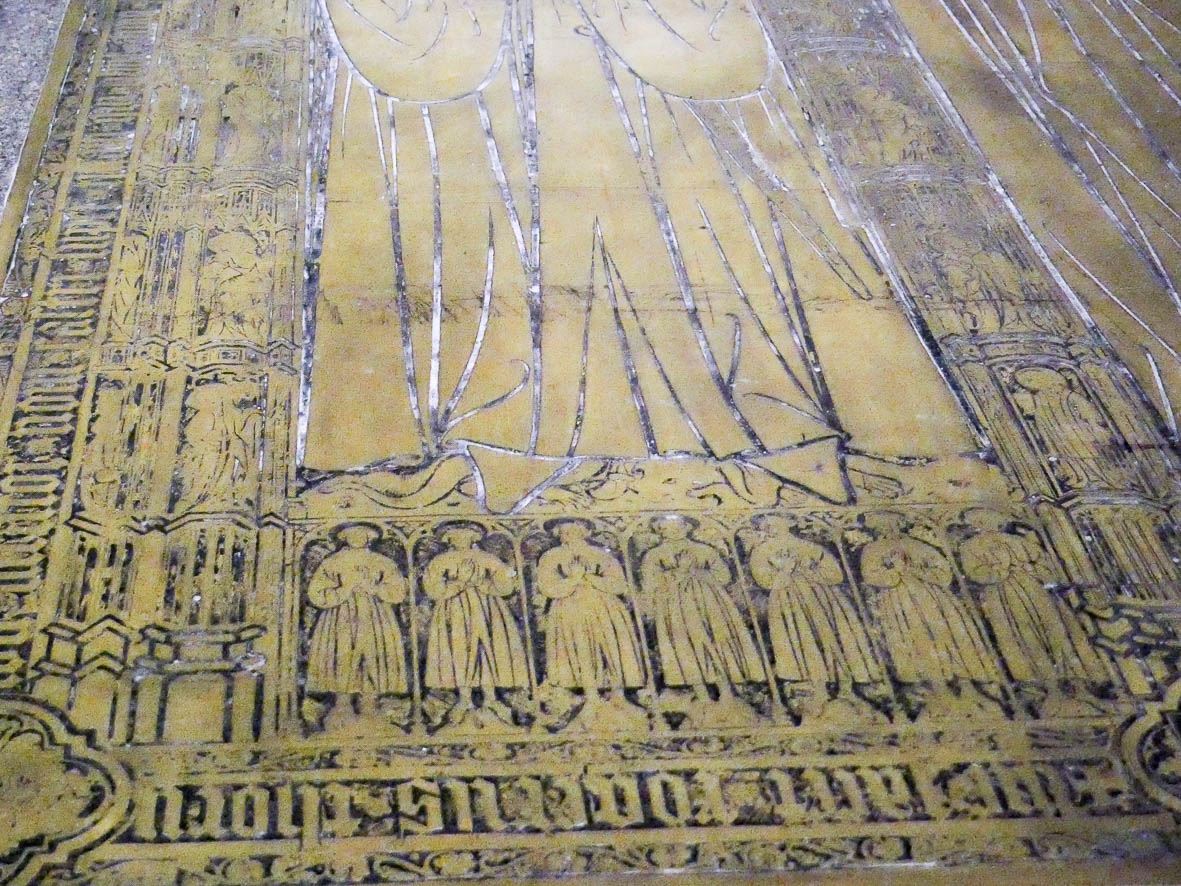 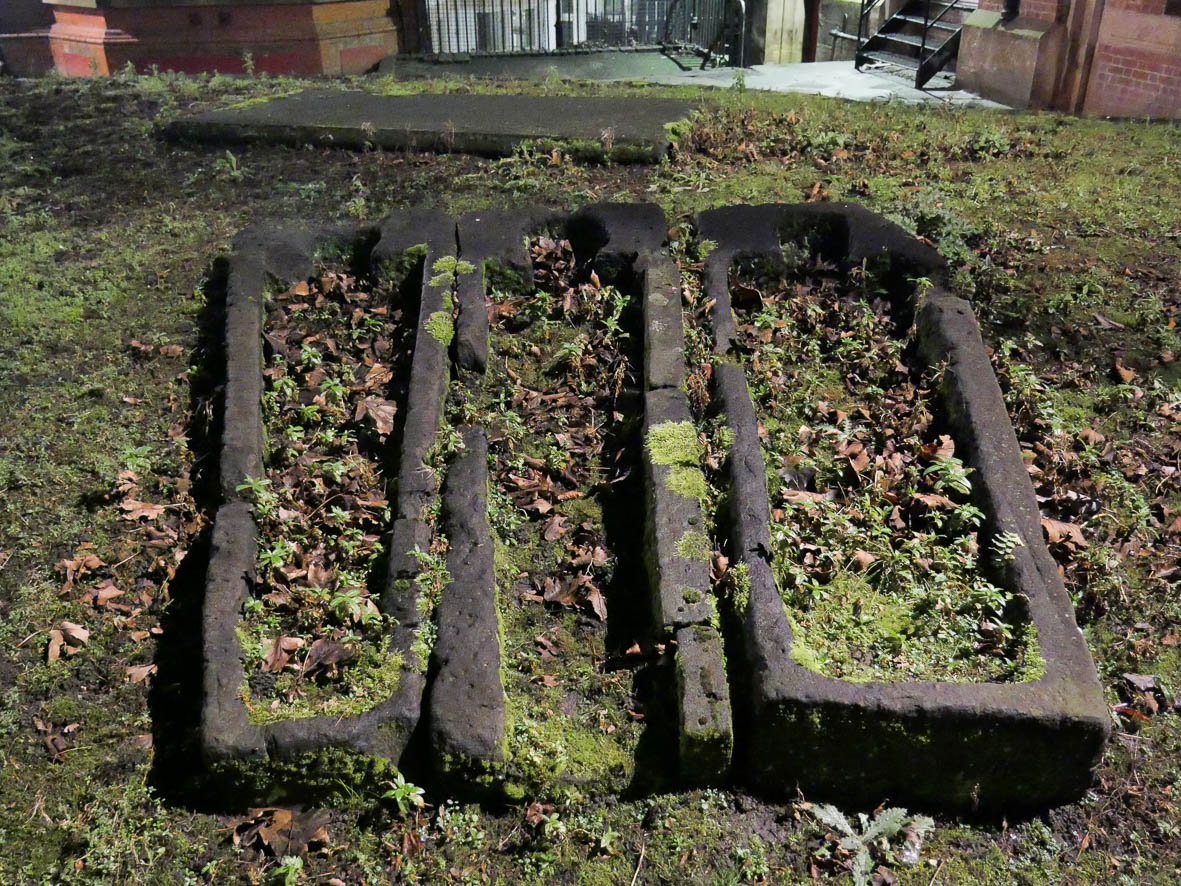 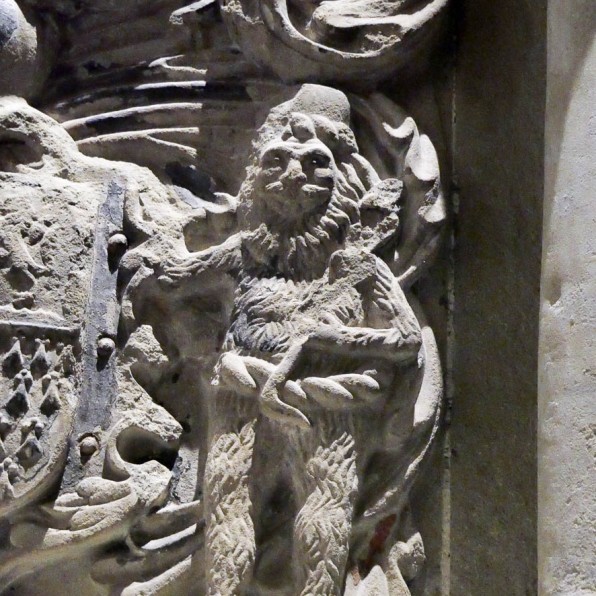 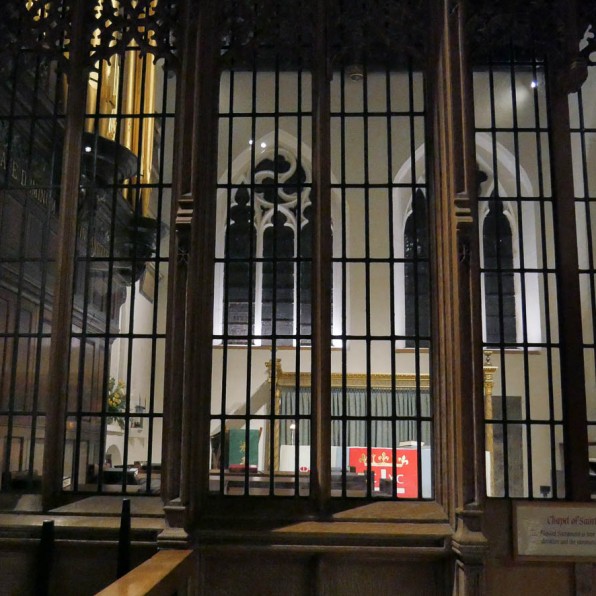 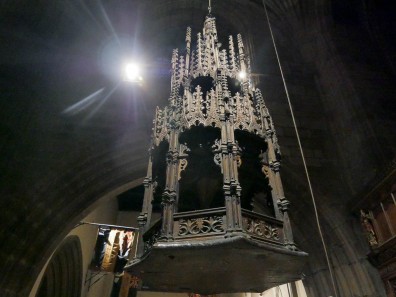 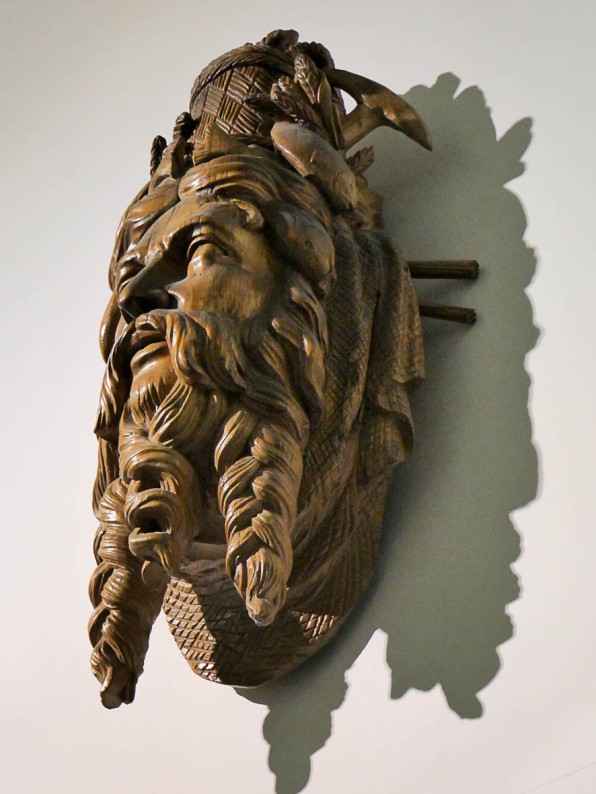 The Tyne River God is an odd object, hanging in acres of white wall space in Newcastle’s civic library.  I had long been meaning to visit as an engraving of the head or mask is on the frontispiece of the edition of Carmichael’s engravings in ‘Pictures of Newcastle‘  that I had been studying in the autumn.

It was carved as a printer’s sign for Aaron Richardson in 1827, becoming an emblem for Andrew Reid and Co. right up to the 1960’s.  The carving is a copy of  a stone original on the front of Somerset house(1786).  It depicts the early industries of the river, coal in a basket with pickaxes, fish nets and possibly corn. 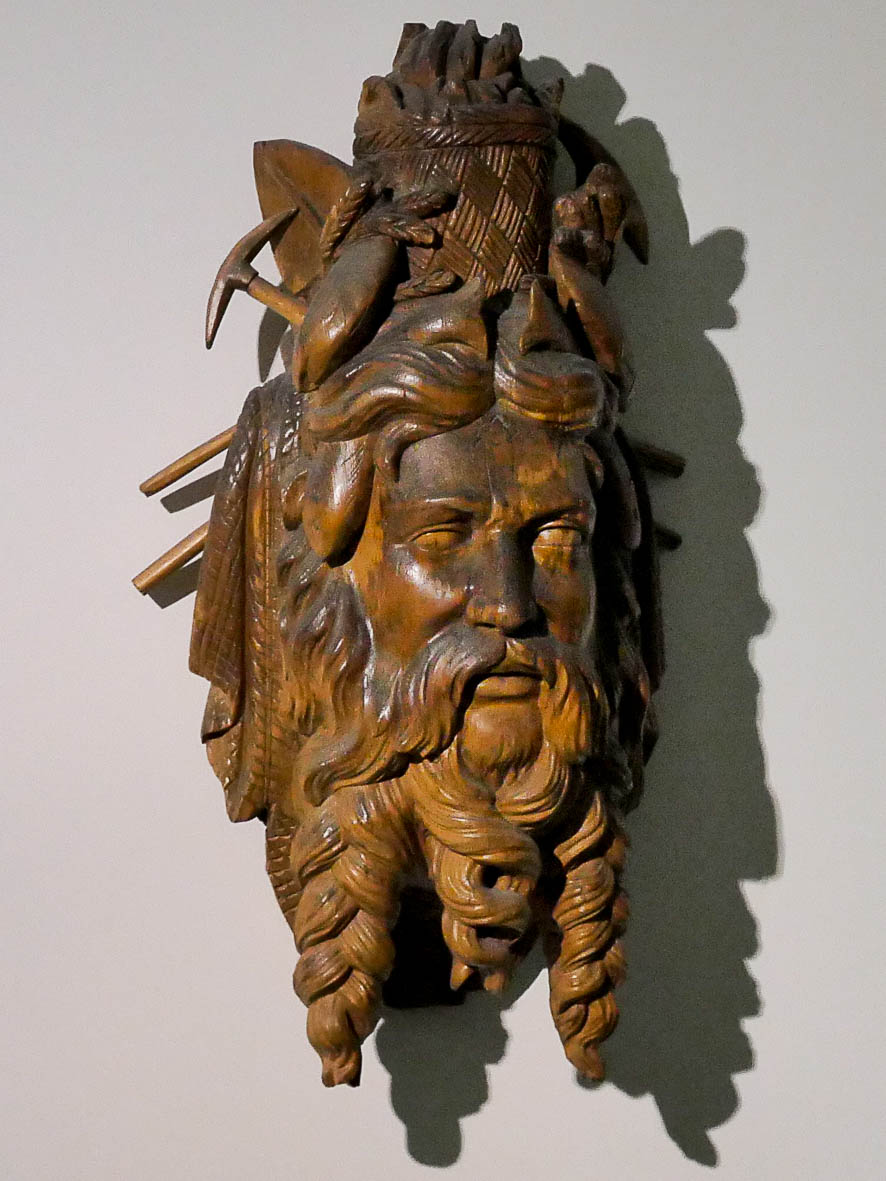 The idea of a sculpture of a Tyne River God, comes from classical and neo classical sculptural traditions of depicting the spirit of a river.  In the case of the Tyne,  this theme was further updated by David Wynne who was commissioned by Newcastle City Council for a monumental sculpture for the civic centre.  His dynamic Tyne River God is  dramatically posed pointing from the side of the building, his shaggy hair shadowing a dark and broody head all stained by Tyneside weather, seeming to summon water or coal from the very ground.

It is nearly 50 years since the sculpture was commissioned, David Wynne sadly died in 2014, never really accepted as a leading sculptor, irrespective of his many major commissions.

What would a contemporary Tyne God would look like?