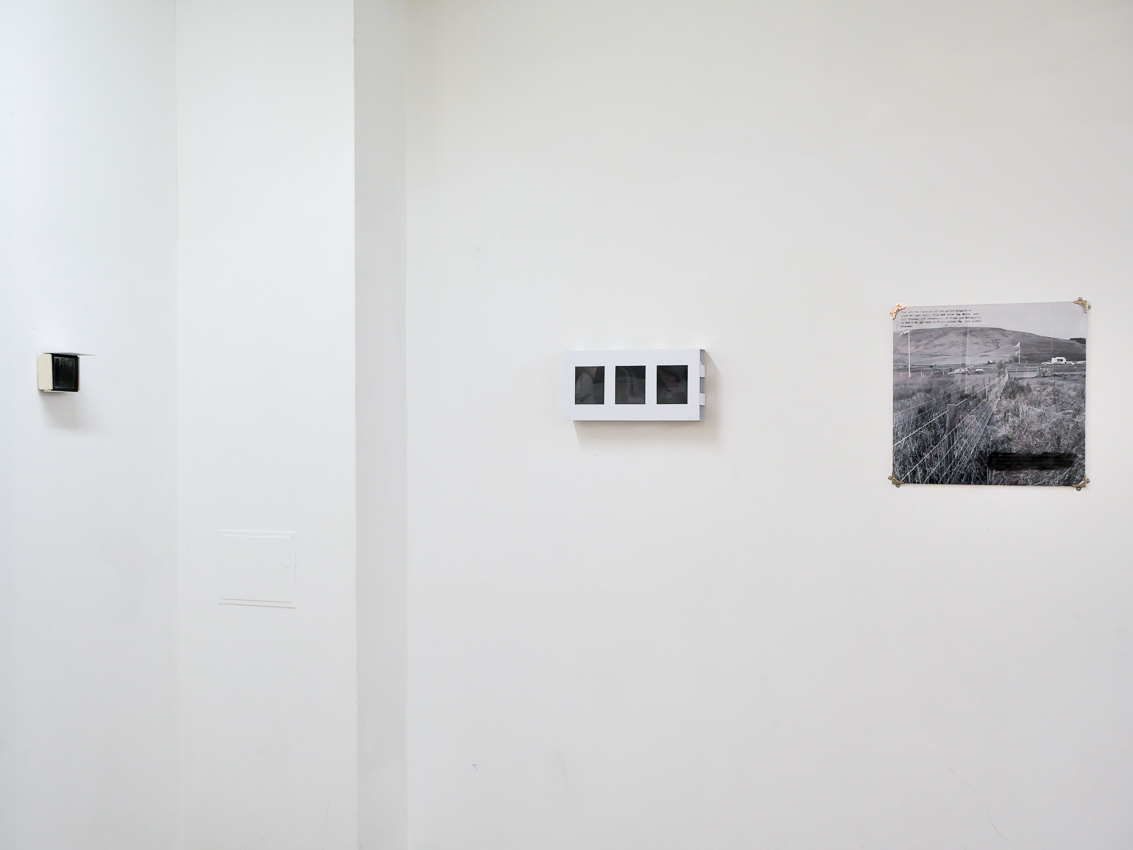 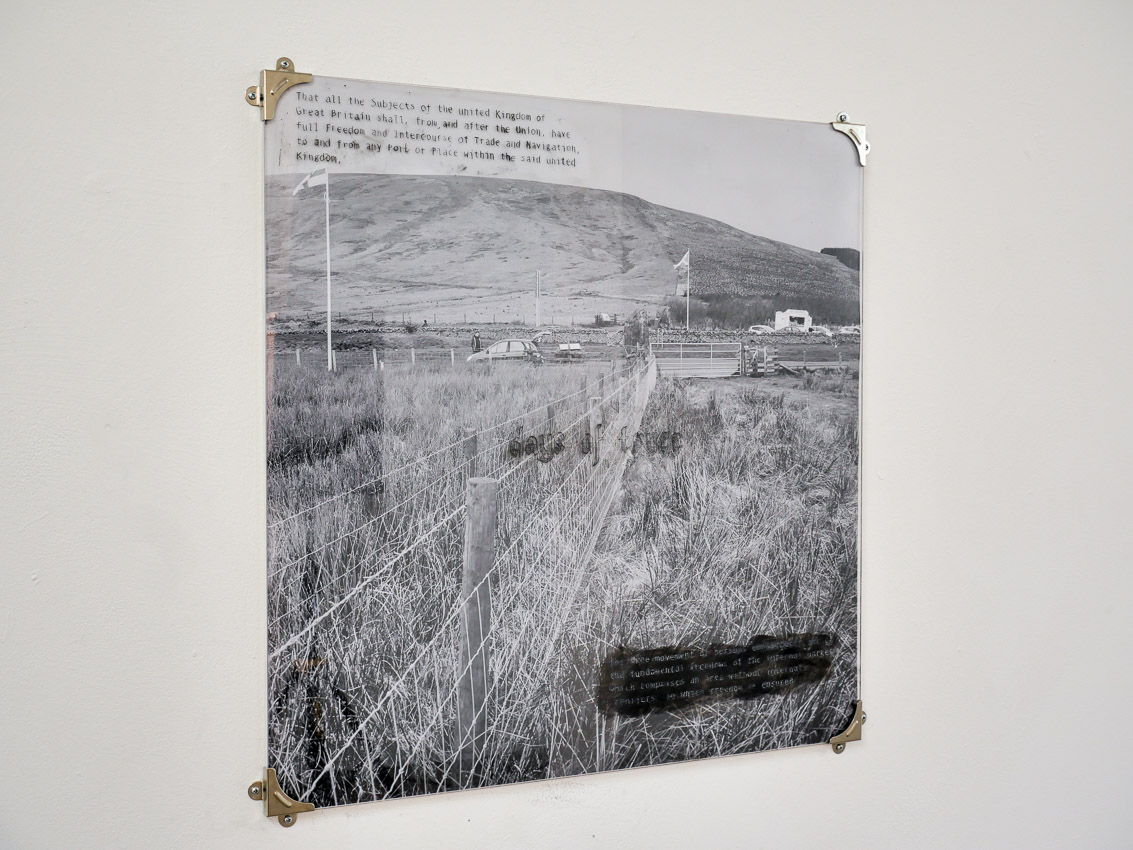 The piece is a flat photograph from a scanned 5×4 negative of the Scottish Border set behind a clear acetate screen with 3 areas of text:

Above: The title text from the Border meetings of the two nations to settle disputes in the 16th and 17th centuries before the union of the kingdoms.

Above: Text from the Articles of the Union, Edinburgh, January 16, 1707

IV. ‘That all the Subjects of the united Kingdom of Great-Britain shall, from and after
the Union, have full Freedom and Intercourse of Trade and Navigation, to and from
any Port or Place within the said united Kingdom, 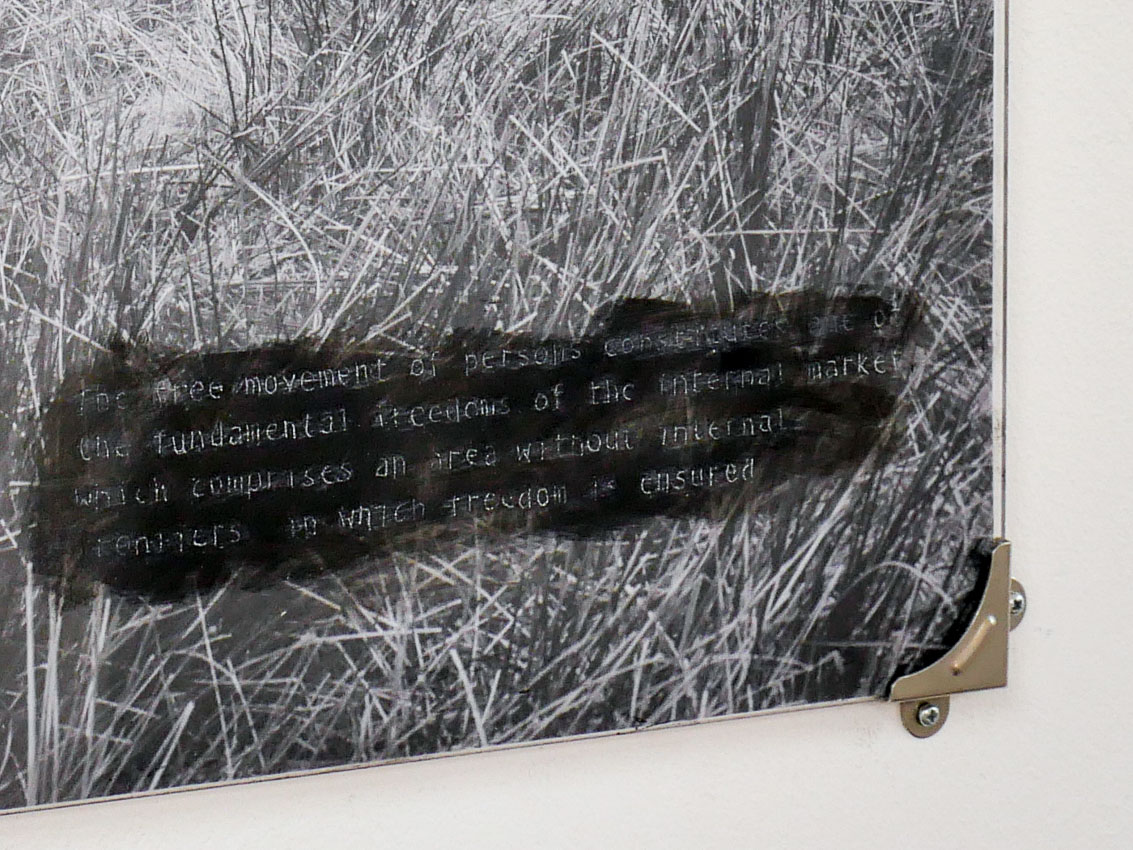 Above: Text from: DIRECTIVE 2004/38/EC OF THE EUROPEAN PARLIAMENT AND OF THE COUNCIL

(2)  The free movement of persons constitutes one of the fundamental freedoms of the internal market, which comprises an area without internal frontiers, in which freedom is ensured in accordance with the provisions of the Treaty.

a Cardboard frame with 3 negatives suspended in a faux ‘lightbox’ format:

The negatives could be illuminated by mobile phone – which is a neat interactive idea:

I developed this idea from:

I was playing with an old cheese box and an overexposed film negative – the images scratched in are figures lying in a prayer/tomb setting and come from research for the Plaguey exhibition at Newcastle Cathedral. 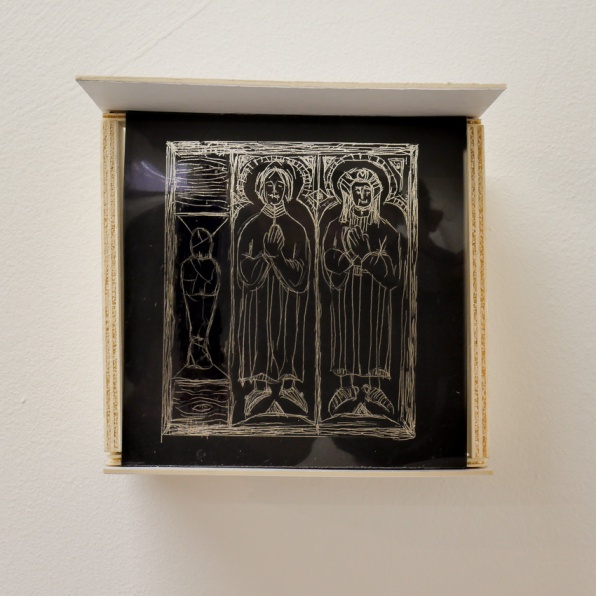 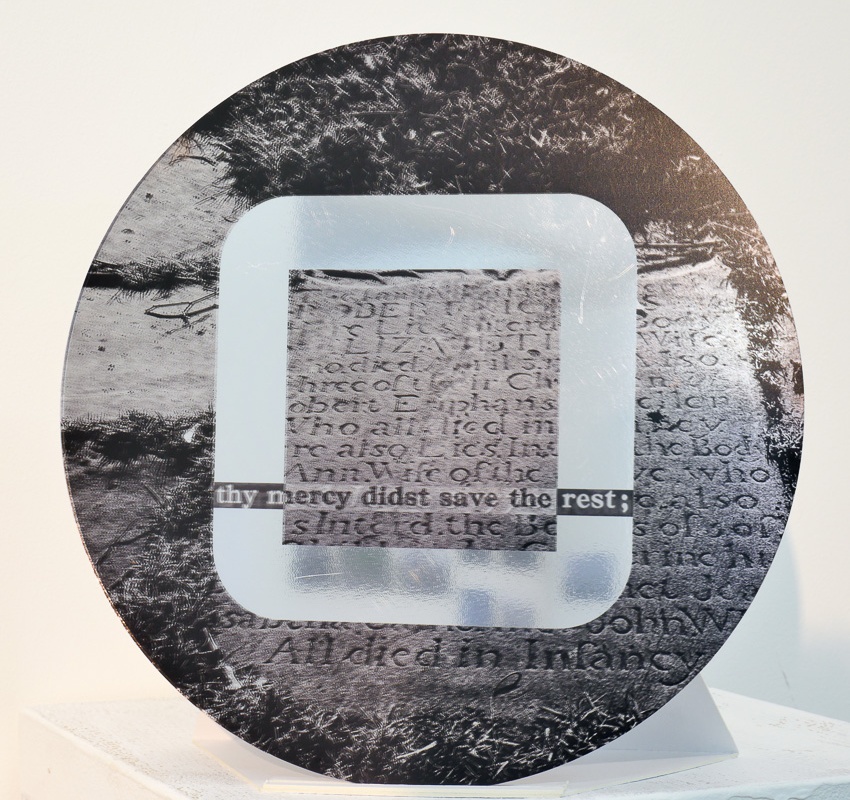 Hardness of Heart is the title of a group of 7 pieces I have made for an exhibition due to go into an exhibition called ‘Wor Plaguey’ – a series of works on the subject of plague and war in the 17th century to be mounted in St George’s chapel in Newcastle Cathedral.  I have combined work on the ideas of using mirrors to displace space and particularly dark or black mirrors.  The designs feature photos taken on film on the Ballast Hill non-conformist burial ground. 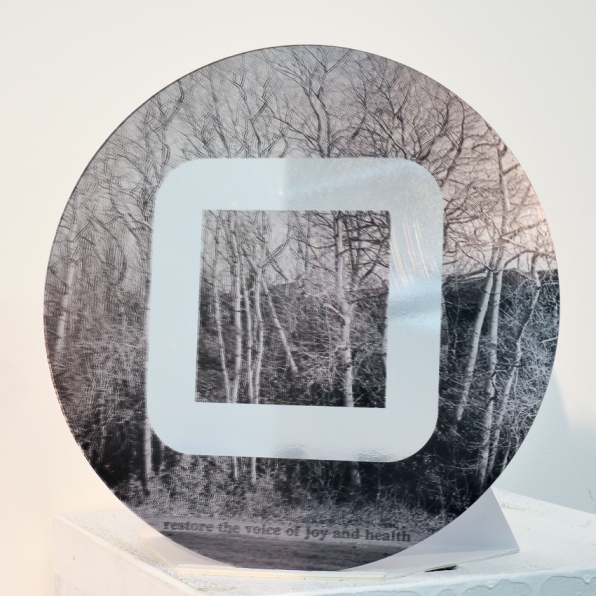 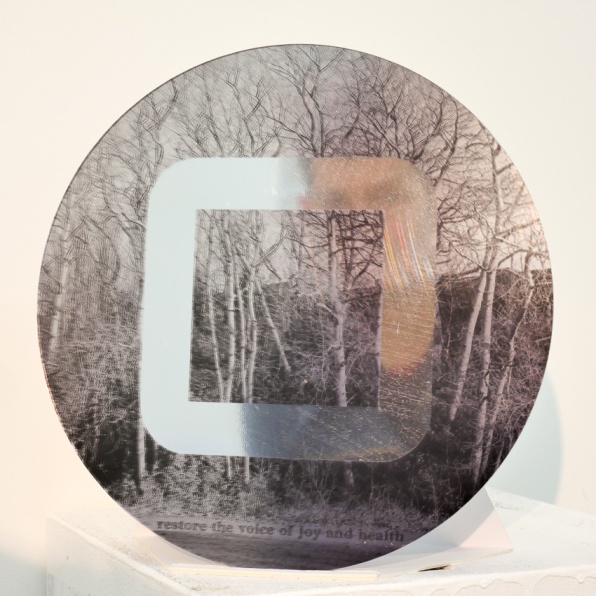 On ‘Good Friday’ the border at 7.20am is cold, the light struggling through to illuminate two laybys, stone walls, the flags of two countries, double sided stones and thin fences tramping off along the hump of hills.

Video recorded in 2 minute segments, rotating the view and listening for the birdsong.  Each chosen viewpoint included the flash of passing cars, heralded by the whine of engines against the hill followed by the drop in pitch as they fade back down the hill, in earshot for so much longer than in eyesight.

I also recorded the first 5 exposures shot on large format camera.  An aesthetic object in a less aesthetic landscape.

The border piper is sick of being the subject of debate, his opinions never broadcast, but his image used to illustrate a thousand press reports over the last few years.

Mistakenly perhaps, this photoshoot minimised the presence of people.

I am planning a series of photoshoots to record the simplicity of the English Scottish Border as a symbol of old nationalisms rising and recreating new geographies. My first intended site is the crossing at Carter Bar, high in the Cheviot Hills and site of historic batlles and truce meetings from previous eras of the contested border.

I also am trying to get a sense of all of the sites – possibly as a series of photography/video responses. First link is to Hugh Pumphrey’s blog and a post on a trip to review the eastern end of the border, earlier in March this year.

Hugh’s Map, below, I hope he does not mind my reproduction and link to his excellent blog, identifies 28 possible crossings (with some discrepancy as the road is the border in places). Number 17, Carter Bar, and 18, the road beyond Keilder water are the two most local and known to me.

also of interest is the physical remains of the Scots Dyke – hard to identify and maybe hard to access.  The location of the best section of the remaining mound seems to be set within a wood, this will offer a different visual perspective. 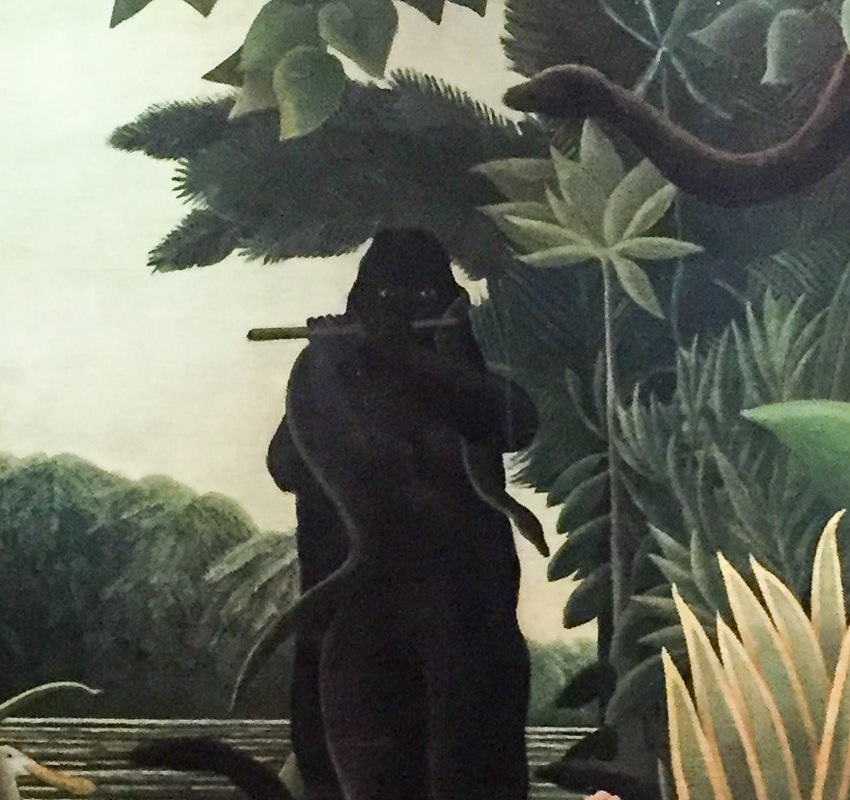 Nothing like a tutorial to send you off where you least expect to go….. 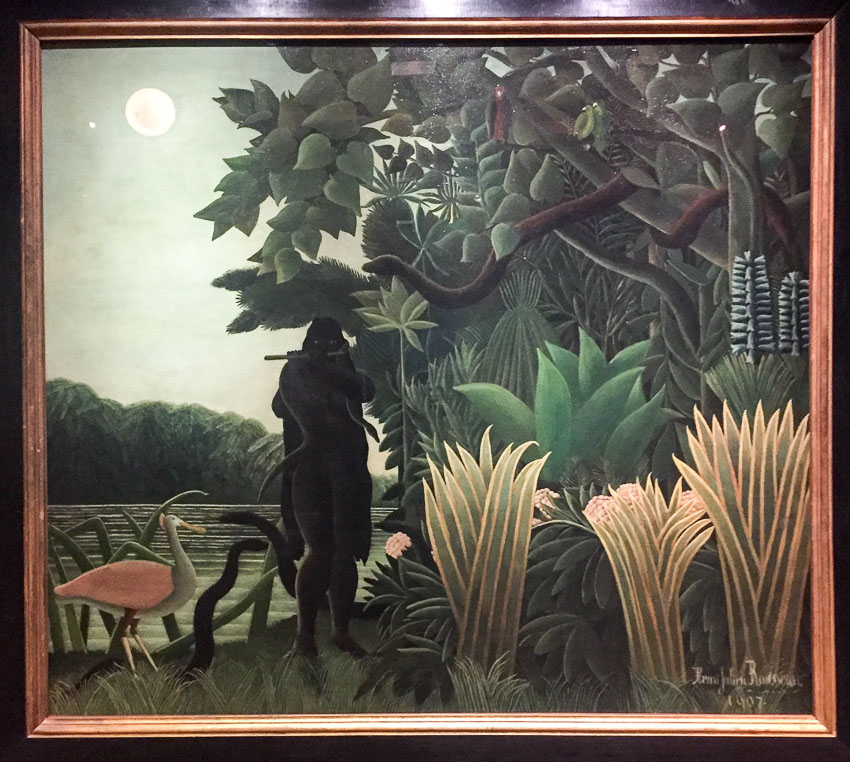 In Paris I saw a number of the great Dounanier Rousseau paintings – this is my photo of La charmeuse de serpents (Rousseau, H. 2007) taken in the Musee Orsay on the recent trip to Paris, those swirling jungles full of the exotic, the danger of the unknown, inpenetrable, superficially decorative, but born of the dream, made real by a painter that never set foot in a jungle.

This is such a good image for my educational research, a metaphor for how difficult work in social media with young people might be, initially and superficially attractive, full of exotic and imagined dangers, inpenetrable at times and a place where teachers rarely go.

Time to clear a path with a sharp machete…… 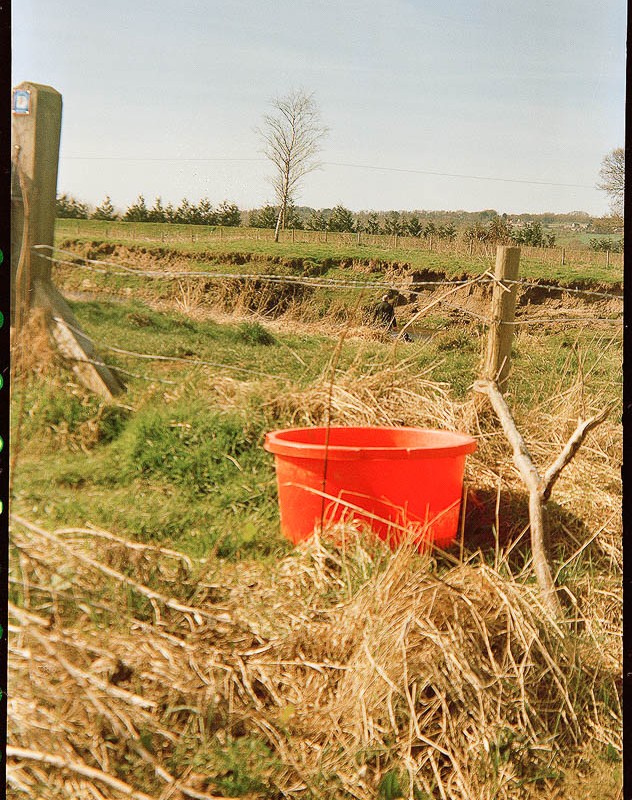 In the University to develop new colour films in the dark room.  The process is controlled mechanical and machined – the results organic.  The negatives are full of unknown colours when they shine from the light box

#mediumformat #colour #negatives – a beautiful sight – but how will they print? Top two rows are on the Ensign #boxcamera

scans reveal a colour nostalgia, as if from a previous time and place.

The red of the bucket is mixed in the 1970’s – the whole is a en elegant iPhone filter…..except it is the real thing!

The last is a bit more on theme – a shot of the ‘new boundary’ bisecting the river walk path, a new border brought to being for no clear reason.